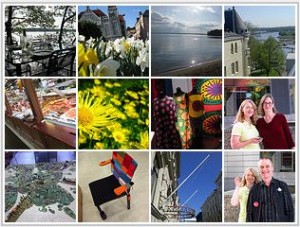 A number of friends and colleagues are among the many lucky library folks heading to Helsinki this week for the IFLA World Library and Information Congress. I wish I could be among them. I’ve had two nice long visits to Helsinki in recent years, most recently for 2 weeks this past May. It’s a lovely city, big enough to be cosmopolitan and full of variety, but not overwhelming and exhausting. For me, it’s a “just right” kind of city. And it’s just a short train or bus ride to get out to the countryside, the lakes and the shore. Though I’m certainly not an expert on Helsinki, I wanted to share a some of my experiences & tips.

First, starting at the airport – visit the airport book swap room (Terminal 2, second floor, next to gate 27) and pick up or drop off a book. Wouldn’t it be wonderful to fill the place full of books from librarians all over the world. And maybe with a label of some sort that promotes libraries?

Bicycle lanes – Finns take their bike lanes seriously. Â You should too. Â If you’re an exhausted, jet-lagged tourist, dazzled by all the sunshine and find yourself walking down a bicycle stenciled portion of the street, get out of that lane, fast. I had a near miss one morning when I was in a severely sleep-deprived travel daze. Â If you do cycle, check out the newÂ Baana bicycle (and pedestrian) corridorÂ that opened in June.

Getting around – If you don’t have a bike (we didn’t), it’s still very easy to get around the city. Options include buses, trams, trains, subway and of course, walking. The transit system covers the city well, seems to run on time, is kept clean and is reasonably easy to figure out. There’s a handy iPad/iPhone app (Mobitransit Helsinki) Â that shows buses and trams moving around a city map in real-time. Buy a transit pass at any of the many Kisokis (newsstands) throughout the city. The one at the central rail-station seemed well equipped to help bewildered travelers. We also found the drivers/conductors very friendly and helpful. A perfect stranger bought me a train ticket one day since we were both bewildered by a ticket machine. She was Finnish though and figured it out. Before I knew it, I had a ticket and found that she was from the British Embassy! Â Amazing. All of the Finns I met were equally friendly and generous.

Museums, sight-seeing, etc. I have to admit, I didn’t visit many museums, churches or tourist sites. Not out of disinterest, just a lack of time. I did get to the Design Museum and Kiasma Museum of Contemporary Art on a trip 2 years ago. Helsinki is a city of great design and this year it is the World Design CapitalÂ (WDC) with lots of intetesting exhibits and events. The WDC web site has some interesting information about library design, including plans for the new city library and information about the beautiful new University of Helsinki library that consolidates a number of smaller libraries.

Libraries – Not only do Finns like to cycle, they like their libraries too. I visited a number of libraries over the two trips. And during this last trip, I used twitter to connect with a number of librarians and had some wonderful personal tours and meals with librarians who generously shared their time with me. The libraries I visited included: National Library of Finland, Library 10Â (near the main train station), Sello LibraryÂ (in Espoo), theÂ Rikhardinkatu branch of the Helsinki LibraryÂ and the Laurea University Library branch in Kerava.

I’ve included lots more information about shops, restaurants, museums, etc. on this Google Map. Photos from our trips are in my flickr photostream. Â If you go to Helsinki, please share your favorites experiences!