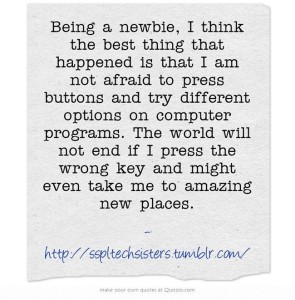 One of the majorÂ projects I worked on over the past year was theÂ SALS TenÂ Mobile Things project that concluded in June. This was part of a Digital Literacy project run by Jill Ryder, Jennifer Ferriss and Sara Dallas at the Southern Adirondack Library System.

It wasÂ modeled on 23MobileThings project originally developed by Jan HolmquistÂ for theÂ GuldborgsundÂ Bibliotekern in Denmark. That project was translated into English by Jan, Kathryn BarwickÂ and Mylee JosephÂ (bothÂ Â from theÂ State Library of New South Wales, Australia). Â Like Helene Blowers’Â original 23Things project, this mobile project is being translated into multiple languages and spreading like wildfire. There’s no doubt that the time was right for this!

For our project, we focused on manyÂ Â of the same topics, but condensed them into 10 topicsÂ that participants covered in aboutÂ 7 months. Each participant had access to at least one mobile device.Â Some used theirÂ own smartphones or tablets, and some used library equipment.Â And it was quite an array of devices! Â EveryoneÂ really did have to get used to the idea of learning to play,Â test, push the ‘buttons’ and justÂ experiment. Which of course was one of the primary goals. 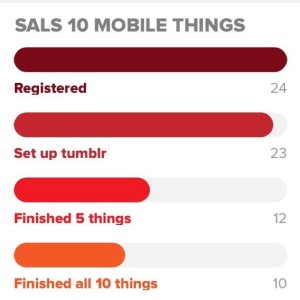 24 people registered for the project and 23 got started by setting up Â tumblr blogs where they would post their projects and reflections on what they were learning. tumblr was a good challenge! We all learned quite a bit about setting it up, following people, posting and how to enable comments with disqus (not totally trivial!)

Despite the early challenge, 21 people stuck with us. Â By the end of the project 10 people had completed all 10 things. A really good result! All told, the 23 active participants completed a total of 140 units/things/modulesÂ for the equivalent of 280 continuing education hours. It’s important to note, that everyone benefits in a project like this, whether someone completed 2 or 10 things, everyone learned new skills and gained confidence.

Some final observations from participants included:

Mobile library services are becoming increasingly important and more than that, expected by library users. Promote your library and the services you offer any place, way, and chance you get. And, donâ€™t be afraid to play around with new mobile technology. I think all of the SALSTMT participants can agree with that! (Jill)

My reflection from this program lands more on a personal level. My techsister, Laura and I have always been close co-workers but working together on these 10 mobile things week after week has brought us even closer. (Patty)

Thanks to the folks at SALS for asking me to work onÂ this project withÂ them.Â I’ve been very fortunate to work with them on a variety of projects over the last decade (or two?)Â Â and it’s always a treat. Â Besides, lunch meetings with good friends in Saratoga? What could be better. 🙂